The Sisters of Sion are following with great interest the Special Assembly of the Synod of Bishops for the Pan-Amazon Region called by Pope Francis between 6 and 27 October 2019.

The theme of the assembly is: new paths for the Church and for an integral ecology. It’s a meaningful moment for the Church in Latin America and in the world, because of the importance of the Amazon to the health of the planet. 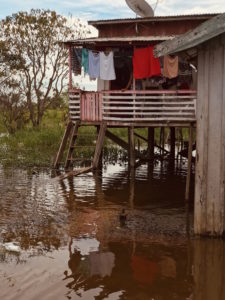 Flooding in the Cacau area of the Amazon.

Some Sion sisters are already involved in itinerant ministry to parts of the Amazon and the congregation is researching the possibility of setting up a permanent presence there.

Earlier this year, during her visit to Amazonia, Sister Ivete Holthmam witnessed the thirst for more knowledge on the part of the Seminarians she met, as well as the daily reality of flooding in the missionary area of Cacau.