The 2019 ICCJ Conference: an arena for challenges and opportunities

A delegation of sixteen Family of Sion members, including nine sisters, represented the Sion congregation at the annual conference of the ICCJ (International Council of Christians and Jews), in Lund, Sweden, whose theme was: “Transformations within and between: How does our new relationship affect Christian and Jewish self-understandings?” 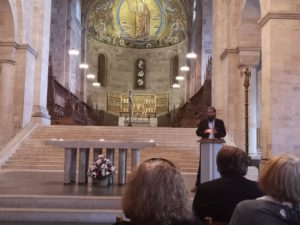 The opening event at Lund Cathedral.

At the opening event in Lund Cathedral, a moving performance of Klezmer (traditional Jewish folk) music set the tone for the conference, and was followed by speeches that invited participants to be mindful and brave in preparation for the sometimes thorny issues they were about to encounter.

“There are challenges in our world today that cause fear,” remarked Canadian Sion partner Barbara Goetz as she prepared herself for the following three days, “and then there is hope. We are embracing the hope.”

Learning together in dialogue and friendship

The speakers of the first day of academic proceedings recalled how, over the centuries, large numbers of Jews and Christians have had intertwined histories. Although Jews and Christians were suspicious, hostile and estranged from each other for a long time, more recently a new relationship of respect and solidarity has begun to develop.

The talks of the following days revolved around the positive effects of this new relationship, negative influences such as nationalism and anti-Semitism, and the Muslim contribution to interfaith dialogue today. 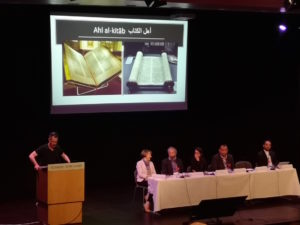 Plenary session “Muslims in the Dialogue”.

For the Sisters of Sion, who have missed few of the ICCJ’s annual appointments over the last half-century, the conference is always a source of learning and friendship, new friendships begun and old ones renewed. “It was a marvellous opportunity,” remarked Sr. Maureen Cusick of Sion’s UK/Ireland region, “to learn together in dialogue and friendship, with so many Jews, Christians and Muslims.”

The lectures and workshops provided ways for each individual and community to explore whether and how a transformation has, for them, taken place. They challenged participants to examine their own responses to the new waves of anti-Semitism and Islamophobia, and posed the question: how do we stand together in solidarity?

A Sion group of fourteen stayed in Lund for two days after the conference to work together on future challenges and opportunities and how to integrate what they had learnt at the ICCJ conference into their ministry.

Sion partners Tina Apostolopoulos and Rebecca Bennett of Australia said that the two days of reflection flew by as they committed to opening spaces for encounter and building bridges where all are  accepted. It is important for them that those encounters are more than intellectual. “They need to touch us on a personal and emotional level”  they commented.

The actions the group proposed included fostering ongoing biblical formation, maintaining a focus on Jewish-Christian dialogue and prioritising learning more about the Islamic tradition, as well as welcoming young people to partner with them.

“Much has been done and indeed we are different from 50 years ago in our relationships,” said Sr Maureen, “but we all agreed that still so much more needs to be explored, lived and experienced together.”

“We feel so privileged and honoured,” she concluded, “to be involved in this amazing ministry in the Church.”