Education for Action: the urgency of interreligious leadership for global good

The power of interfaith leadership in bringing about positive change in global challenges was the focus of the panel Sister Lucy Thorson from Canada took part in at the international Education for Action conference in Rome. 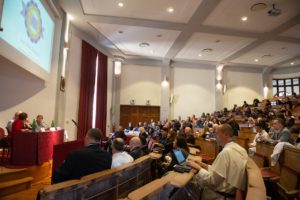 The interactive panel at the John Paul II Center for Interreligious Dialogue.

The event, attended by over 150 people, marked the 10th anniversary of the Interreligious Program at the John Paul II Center of the Pontifical University of St. Thomas Aquinas in Rome. It involved leaders on interreligious dialogue from the USA, Canada, Palestine, Holland, and Rome, whose interfaith experience spans Christianity, Judaism, Islam and Buddhism, among others.

Sister Lucy was on an interactive panel that debated how interfaith leaders can move from study to practice, activate networks, and instigate impactful actions that address current global challenges.

Alongside Lucy were: Huda Abuarquob, Regional Director of the Alliance for Middle East Peace; Aart Bos, CEO of MasterPeace; and Joyce Dubensky, CEO of the Tanenbaum Center for Interreligious Understanding, who also acted as moderator. 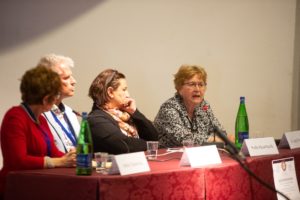 The panel explored the question: how can knowledge about different belief traditions be translated into mutual collaborative action to resolve conflicts in a peaceful way? The speakers drew from their experiences in the Middle East and with refugees and immigrants. The bottom-up approach of grassroots peace movements was given due credit, based on the assertion that everyone has a contribution to make.

Ways of involving young adults in the world’s contemporary conflicts were also confronted. The panel reflected on the role of education and awareness-raising in schools, to create a new generation of interfaith leaders, and ensure that interfaith dialogue becomes and remains standard practice in the global arena. 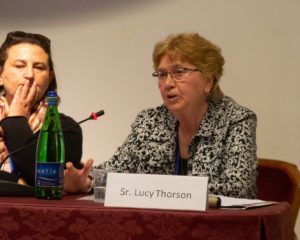 Lucy stressed that today interfaith dialogue and collaborative action are a necessity, not a luxury.

Sister Lucy brought to the table her many years of experience in ministry as a Sion Sister in Israel and Rome. During her seventeen years in Jerusalem, she served as President of the Ecumenical Theological Fraternity in Israel. And in Rome, she was Director of SIDIC – an International Centre for Jewish-Christian relations established in 1965 at the request of the Second Vatican Council Fathers.

Lucy spoke about the Sion vision of interfaith relations and, in concrete terms, the social and cultural initiatives carried out in Sion schools and adult study centres all over the world. She said that education must give future leaders a solid grounding in interreligious action, for the greater common good. “I am convinced,” said Sister Lucy, “that today interfaith dialogue and collaborative action are a necessity, not a luxury.” 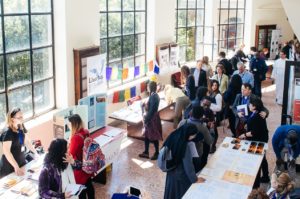 Participants networked at the “marketplace of ideas”.

As well as a series of panels, a “marketplace of ideas” with twenty stands was a lively hive of discussion. During these informal exchanges, alumni, religious and lay participants alike echoed the importance of education as the basis for action in interreligious relations.