The May 7-9 conference at the Gregorian University, entitled “Jesus and the Pharisees: an interdisciplinary reappraisal,” aimed to challenge negative stereotypes that have built up over the centuries about the Pharisees, inviting Christians to take a more appreciative look based on the results of modern Biblical scholarship.

The conference featured scholars from both the Jewish and Christian traditions from Argentina, Austria, Canada, Colombia, Germany, India, Israel, Italy, Netherlands, and the United States, and Sister Clare Jardine of the Sion Congregational Leadership Team participated in all three days.

The Pharisees were an ancient Jewish religious movement that more or less disappeared almost 2,000 years ago, and are seen today as having laid the intellectual, legal and ritual basis for modern Judaism. 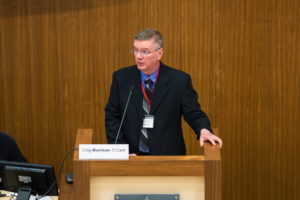 The conference first dealt with the possible origins and meanings of the name “Pharisee” in different languages. It then examined the various ancient sources about the Pharisees: Josephus, Qumran, archaeological data, the New Testament, and Rabbinic literature.

After a round table discussion of the results concerning the “historical” Pharisees, the second part of the conference was devoted to the history of interpretation and its effects, from Patristic literature, to Medieval Jewish interpretations, to passion plays, films, religion text books, and homiletics.

Although the word “Pharisee” means “one who is separated for a life of purity” (derived from the Hebrew: פרוש parush), the term is commonly used derogatively to denote a self-righteous or hypocritical person. In his presentation, Carmelite Father Craig Morrison said “Often in preaching and teaching, we’re unaware of the caricature we create about this most interesting group of religious people.” The academic proceedings concluded by looking at possible ways to represent the Pharisees less inadequately in the future. 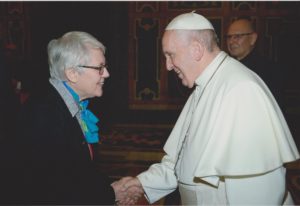 Sister Clare said that it was very stimulating to listen to in-depth research on this important topic, and hoped that “bringing together international scholarship of Jews and Christians will give an impetus to revising the current general portrayal of the Pharisees.”

The conference reached a crescendo on Thursday with a private audience with Pope Francis. The event also marked the 110th anniversary of the founding of the Pontifical Biblical Institute by Pope Pius X in 1909.