We are Sion – International Youth Meeting in Costa Rica

A workshop on the connections between different faiths.

Twelve to eighteen-year-old Sion students from four continents gathered between the 6 and the 14 of April in Costa Rica to reflect together on the charism of Sion and the different realities of Sion youth across the globe. The aim was to create bonds and fraternity that encourage them to be agents of change in their countries.

Among the topics under debate was how the charism of Sion affects the lives of the young participants. The week-long journey took them through an analysis of the needs, limitations, similarities and differences within the Sion student community, and from this starting point they developed their common and diverse dreams.

“A happy place” was how Jemel Johnson, 13-year-old student from Notre Dame de Sion School in Kansas City, USA, described the meeting. “I learned more about the cultures of other places and what other Sion schools are like” he said. 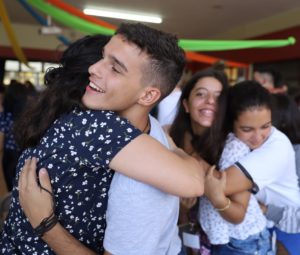 This cultural exchange was not without its challenges, given that the students from Costa Rica, Brazil, France, USA and Australia were communicating with each other in four different languages. “It was not always easy to communicate with each other,” commented Sigurd Ramos Marin, Principal of the Colegio Nuestra Señora de Sion in Moravia and host of the event.

Jemel said he’d picked up a little bit of Portuguese from the Brazilians and expanded his knowledge of French from the students from Paris.

But the students, teachers and organizers involved rose above the barriers of the spoken language and, according to Ramos Marin, “always understood each other thanks to the language that all the students of Sion practice: love.”

At the end of the week the participants made commitments to take away with them and follow through in their home countries.

Jemel is quite clear about the pledge he has made. “Back home,” he said, “I’m going to try not to be as judgmental as I might have been before. I will try to be more peaceful, more calm, and more understanding of other people’s feelings by putting myself in their shoes.” 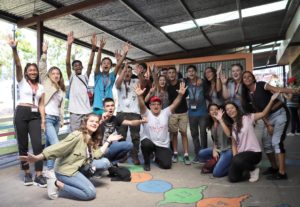 Overall, the Notre Dame de Sion Congregational Schools Team that sponsored the event considers it an achievement of great spiritual and intellectual enrichment, and sees nothing more satisfying than the knowledge that Sion students all over the world share the same guiding principles.

As yet, another gathering has not been scheduled, but students, directors and teachers expressed unanimous hope that the experience would be repeated within the next three years, and that next time it might involve more of the 22 Sion schools around the world.