Interculturality, growth and hope in Kenya

From 13-26 June, two Sion sisters took their itinerant mission to Nairobi, Kenya, with the aim of helping seminarians of the Franciscan Missionaries of Hope deepen their appreciation of the Jewish people and their knowledge of the Scriptures. It turned out to be an enriching experience for all concerned. 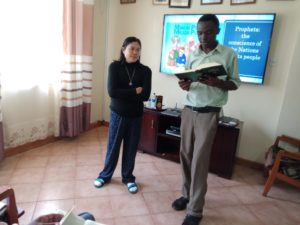 Br. Emmanuel reads a passage from the Prophets.

Sr. Clare Jardine and Sr. Arlyne del Valle Casas reached out to brothers from Uganda, the Congo, Rwanda, Kenya and Nigeria. The sessions centred around the Jewish feast of Passover, Jewish culture, prophetic literature, Paul’s letters to the Romans and, tying in with the Franciscan brothers’ own mission statement, the topic of Hope, and its biblical foundation from a Jewish-Christian perspective.

The sisters varied the teaching techniques they used to bring the subjects to life. They interspersed projected presentations with discussions, video clips, groupwork and creative interaction. 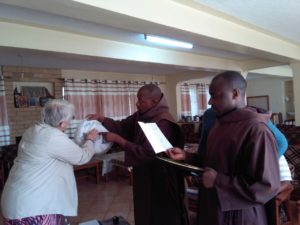 The brothers enjoyed seeing the Seder plate for Passover, the Tallit (prayer shawl), the Tefillin (small boxes containing the words of the Sh’ma which Jewish men place on their arm and head) and the Matzah cover that Sr. Clare brought with her, and sang Hebrew songs such us Shalom Chaverim, Oshe Shalom and Sh’ma with great enthusiasm.

They also appreciated having time for discussions and being able to elaborate their thinking about Judaism and Jewish-Christian relations in a group situation. The line between formal study and personal growth blurred as on some days discussions continued after class and into breaks and mealtimes. 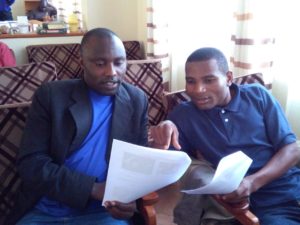 Br. Expedito and Br. Giido reflect on the Prophets.

The brothers found the sisters to be “well-informed”, “open” and “prepared”, and they recognised the value of the time the sisters spent in Jerusalem. They were happy to have learnt about the Jewishness of Jesus and St Paul. As one brother, Julian, commented: “It is important to know the historical context of their time.”

The success of the training was summed up by another participant, Br. Deoson, who affirmed “It helped us to understand our roots in Judaism”, and described the Jews as “our elder brothers”. For the sisters, it was a joy to see the brothers quoting verses from the Scriptures to support their reflections. The brothers were keen to study the hand-outs the sisters had given them and are looking forward to receiving more guidance in the future. 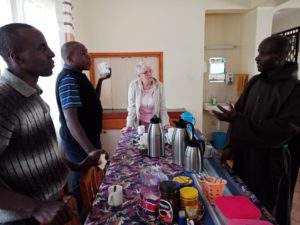 The sisters were grateful for the warm hospitality they received. Studying and sharing mealtimes with the priests and brothers gave them the opportunity to live a brief intercultural experience. Sr. Arlyne described it as “an enriching time to share our charism with the brothers, who invited us not to simply come to teach, but also to pitch our tents in Kenya”. Amidst the multi-way exchange, they learned about the different cultures in Africa, as well as the presence of conflict in other parts of the continent.

During their stay, the sisters attended the 175th anniversary of the Franciscan Sisters of the Immaculate Mary (SFIC), and heard of the courage and faith of the three SFIC sisters who started a community in Kenya.

Clare and Arlyne left Kenya with a feeling of hope on two fronts. First, a quiet trust in the seminarians’ growing appreciation and respect for other religious traditions. And, regarding the growth of their own congregation, hope, as they discern establishing a community in Africa.