Dialogue and justice: it’s the relationship that matters

On 29 April Sister Therese Fitzgerald, Irish Sion member, gave a talk on how right relationships lie at the core of both dialogue and justice, at the annual conference of SEDOS (Service of Documentation and Studies on Global Mission) in Ariccia, Italy.

The five-day event on “Mission in a Pluralisitic World” involved speakers with experience and knowledge on missionary challenges from Egypt, Belgium, Germany, Italy and Ireland. The main themes treated were Freedom and Islam, Charity and Buddhism, and Justice and Judaism.

Sister Therese spoke about her experiences in Dublin, Ireland, where she is engaged in dialogue through the Council of Christians and Jews. She also leads biblical reflections using Jewish sources in parishes and works as a councellor.

Her presentation started by looking at Austrian-born Israeli Jewish philosopher Martin Buber’s definition of dialogue as “the ground of self-realisation”. By entering into dialogue, she explained, you can grow more fully into your own identity, whilst at the same time becoming more open to developments and difference. This takes awareness and listening skills, as well as an attitude of openness towards the people involved and what may emerge as the dialogue progresses. 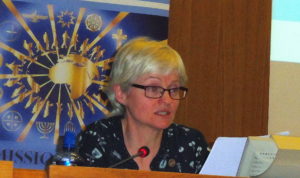 But the benefits of dialogue reach far beyond self-realisation. Therese went on to show how, from a broader perspective, awareness and listening are key to achieving justice for all people and our planet in the long term. She examined how the relational aspects of justice and the pathways towards embracing them are rooted in the Bible, and considered the importance of “right relationships” with reference to the phrase “righteousness and justice” in Genesis 18:19. This, she explained, provides a basis around which justice, as a way of being in the world, can be explored.

The talk concluded that dialogue and justice both need to be based on a desire to be in right relationships with others: with God, oneself, other people and the environment. And right relationships assume a way of relating that respects and supports human rights and protects the dignity of all creation.

In a final call-to-action, Therese urged: “For a vision of right relationships to exist, where all people and the planet have their needs met, we must create and develop just structures that ensure long-term results for a better world.” 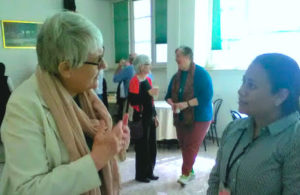 Sister Clare Jardine and Sister Nayeli Mendez Serrano discussed the impact of dialogue in their ministry during an interval.

Therese’s approach to the debate on religious pluralism provoked interesting questions and comments from conference participants. Marist Sister Nayeli Mendez Serrano, who meets people from different backgrounds in her ministry as a nurse in Mexico, said that she felt motivated to engage more in ecumenism and interreligious dialogue in the hospital where she works. “I am going to listen more,” she said, “and try to create an atmosphere of respect and openness to others.”

Another participant, Sister Maria Hornung, has worked with Interfaith Philadelphia for fourteen years, and is involved in a programme called “Growing Spiritually Together” in a shelter for homeless and substance-dependent women. She said that Therese’s presentation was the perfect backdrop for the life of engagement of the four panelists who spoke of their being drawn into the mission of interfaith relations and how this ministry had changed them, as it had changed her. She took away with her from the SEDOS conference a sense of hope and a notion of how blessed she and all participants are “to be a part of this aspect of Christ’s universal presence”.

Father Peter Baekelmans, Director of SEDOS, said he hoped that the seminar would encourage missionary congregations in the Church to be actively involved in interreligious dialogue.