An initiative supported by the NDS Congregation to celebrate the rights of the child.

November 20, 2019 marks the 30th anniversary of the International Convention on the Rights of the Child. 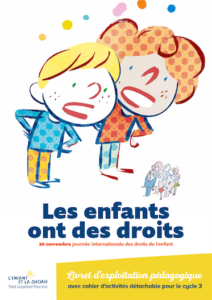 The booklet, produced by the association’s Director, Galith Touati, and Sion Sister Isabelle Denis, aims to educate students about the history of their rights, and invites them to reflect on the experiences of Jewish children persecuted during the Second World War.

This educational resource showcases the life, the action and the writings of an exemplary figure, considered the inspirer of the International Convention on the Rights of the Child: the Polish Jewish pedagogue Janusz Korczak.

The tragedy of the Second World War, and in particular the Holocaust with the extermination of 1.5 million Jewish children, brought a need to defend human rights, including the rights of the child.