Bible teaching in the Amazonas

The Pauline Letters were the theme of the Sisters of Sion’s itinerant training program held in June for seminarians and lay people at ITEPES (Instituto de Teologia, Pastoral e Ensino Superior da Amazônia) in Manaus, capital city of the state of Amazonas in the North Region of Brazil. 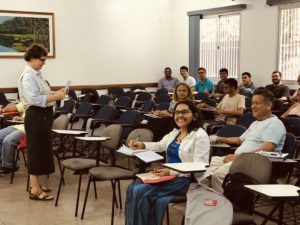 Since 2015 the Sisters of Sion have been coming to the area twice a year to carry out two-week biblical teaching at ITEPES, which welcomes students from nine Amazonian Dioceses and sorely needs Bible teachers.

Sister Ivete Holthmann was accompanied by Father Videlson Tele de Meneses, specialist in the Pauline Letters, from the Diocese of Aracaju. This was their second mission to the Amazonas. This time the Institute asked them for a one-week intensive course.

They taught a group of 40 students, seminarians of theology and interested local people at ITEPES. The college also carries out courses in Liturgy, the Bible, formation for the Diaconate and Pastoral Theology.

Sr Ivete’s dream is to offer intensive weeks for catechists during vacation periods. In the mean time she was satisfied with the job done and believes the program has had positive effects in the Amazon. Fr Ricardo Gonçalves Castro, Director of ITEPES, agreed with her. He said that since the project started four years ago, the level of biblical knowledge of teachers who have attended the courses has improved. 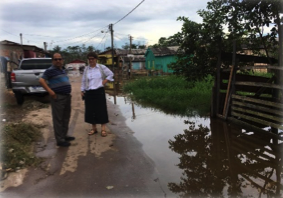 Sr Ivete and Fr Videlson in Cacau Pirêra, where flooding is a growing problem.

Sr Ivete commented: “I feel the seminarians thirsting for knowledge.” Many of them come from indigenous tribes. They are formed in Manaus, and then return to their Dioceses. Ivete had the opportunity to visit the missionary area of Cacau Pirêra with Fr Cândido Cocaveli, Administrative Director of ITEPES. The people of this area live in extreme poverty and in recent years the Rio Negro river has risen, flooding houses, with increasing frequency.

During their stay, Sr Ivete and Fr Videlson sat down to discuss the future with Fr Ricardo and Fr Cândido. The ITEPES representatives expressed their appreciation of the training program and voiced their wish for longer similar initiatives of one month or a whole semester, and even for establishment of a permanent community in the Amazonas.

In terms of calendar planning, the group began to schedule a National Bible Congress that ITEPES, the Brothers of Sion and the Sisters of Sion are organizing collaboratively, to be held at the Institute in July 2020.