A new church in Berba, Egypt

After five years of collaborative effort and patience, a new church has finally opened its doors in the village of Berba in rural Upper Egypt, where the Congregation of the Sisters of Sion have been present for 25 years. Sister Jackie Chenard, who lives in Berba, was joined for the occasion by Sr. Darlene De Mong and Sr. Victoria Nabil who is originally from the village. 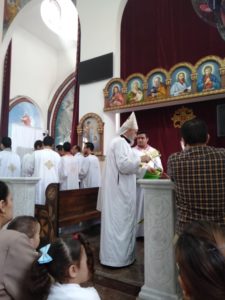 Bishop Botros celebrated the first mass in the new church.

Bishop Botros of the Diocese of El Minya carried out the official inauguration, to the great applause of all those who had come to take part at the opening. Many people had embarked on a four-hour journey home from Cairo to be there.

Local people contributed to the new church’s construction in different ways. Some donated money, whilst others gave hands-on help with building works such as mixing cement. One woman gave the church her wedding ring to sell to raise funds for the project. She brushed off protests, saying it was all she and her husband had to give, and they would just get a cheap one to replace it.

Muslim neighbours were extremely patient and put up graciously with much disturbance while the site was under construction. They came to offer their congratulations on the afternoon of the opening, and were welcomed in to share food and drinks.

The week after the opening, Bishop Botros stayed in Berba for four days and he, the parish priest Abouna Ibrahim, and a man from the parish visited every Christian home in the village. Every day, different families invited them, along with Sr. Jackie, for lunch and dinner. 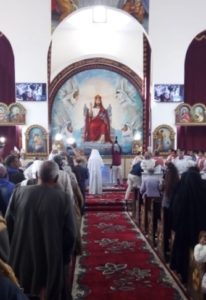 The church was full for the blessing.

As she walked to these houses with the bishop and priest, Sr. Jackie was moved by the priest’s warm interaction with the Muslims they met on the street. Interfaith relations have been cultivated in the village over the years, and are expressed in many ways, from simple gestures of good will to socially impactful initiatives. Christians and Muslims habitually exchange greetings on each other’s feast days. And they meet at a Developmental Centre run by the diocese with activities open to all local people, including six kindergarten classes, and trips to get to socialize with each other.

The following week was Holy Week in Egypt’s Coptic Church, and saw a continuous influx of people through the new church doors. Sr. Jackie and three other Sisters of Sion joined the celebrations and were delighted to hear the church bells once again sounding the presence of this strong and faithful Christian community.