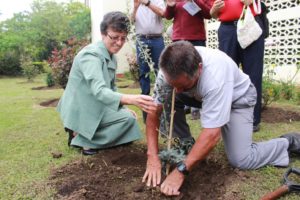 An olive tree was planted to mark the anniversary.

This year the Centre for Biblical Studies and Jewish-Christian Relations (Centro de Estudios Bíblicos y Relaciones Judeocristianas – CERJUC) in Moravia, Costa Rica, sponsored and co-ordinated by the Sisters of Our Lady of Sion, celebrates 30 years of pastoral work.

To mark the anniversary, a mass was celebrated by Father Randall Villalobos and attended by the CERJUC staff, students, collaborators and friends. After the mass, an olive tree was planted, to a backdrop of live music, in the garden of the Colegio Nuestra Señora de Sion school.

A mention of the intent to entrust a new centre for Jewish-Christian relations to the Sisters of Our Lady of Sion can be found in the V Archdiocesan Synod of 1984-1985.

However the CERJUC story really began four decades before the centre was actually opened when, in 1949, Hungarian Sion Sister Yolanda Palfi arrived in Costa Rica. Sister Yolanda set straight to work promoting harmonious relations between the local community and the many Jews who were immigrating to Costa Rica at that time, particularly from Poland.

Local Sion Sister Margarita Jiménez Sáenz continued the work started by Sr. Yolanda and was, for many years, inexhaustible in her mission to promote biblical study within parishes and communities in even the most remote corners of the country.

Instrumental to finally founding the centre was Sion Sister Soledad Haug Umaña, a local theologian and biblical scholar who succeeded in bringing together theologians, Catholics and non-Catholics of national and international standing. She officially inaugurated the centre on April 4, 1989, and managed to establish it as a place of renown, both for the promotion of popular biblical study and for Jewish-Christian relations. 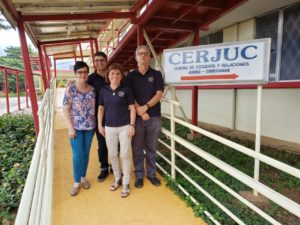 Over the years many people and friends have given their work, collaboration and love to the centre. Mr. Hernán Rodríguez Castro, librarian, workshop instructor and member of the centre’s team of co-ordinators, recalls how many generations of people have experienced a transforming and liberating spirituality in CERJUC.

Mrs. Marjorie Salas Chacón is very grateful for the opportunity she has had to give her services as a volunteer in the centre’s library, and also to take part in workshops. “I am discovering a different God,” she said. “He is an ever-present God, respectful of my decisions, who teaches me service and compassion, and respect for the values of my neighbour.”

Plans for the future include extending the educational work of CERJUC to other parts of Central America, via both traditional and electronic means.