Three of us: Teresa, Helen and Anne took part in an historic event. On Whit Sunday we walked in the Whit procession, we could not find the Catholic groups, so walked behind an Anglican group.  The last time I walked in such a procession must have been prior to the war of 1939. At that time if you were Catholic you processed on Whit Friday; Anglicans processed on Whit Monday. Originally these processions started with the Coronation of King George 4th in 1821, later became the Sunday scholars, those learning about religion, walked through the town. Children had new clothes and were given a penny by kind neighbours. Mills and Factories after the Industrial revolution had a week’s holiday during Whit Week. The Irish still process through the town around March 17th.

THE HISTORIC EVENT, The Roman Catholic Bishop John Arnold, gave the address, dressed in simple black, quite unlike his Anglican brothers who were all dressed in copes with marvellous embroidery on some of them. The Anglican priest who organised the gathering, we all met in Albert Square, asked us to encourage our Catholic neighbours to join in this ecumenical gathering annually. There we sang hymns, had  very good music group leading the singing. We prayed the Our Father together. There were many people on the pavements who were all walking with us,  so I’d guess several hundred people gathered. This is the first time a Catholic priest has been invited  (perhaps not) to the High Table, the steps on the Town Hall, Bishop Arnold said “Our work as Christians was to be  missionaries at home, create unity together”.  The group responded to the  Bishop’s words with spontaneous clapping. (Sr Anne McNally, NDS,  Manchester) 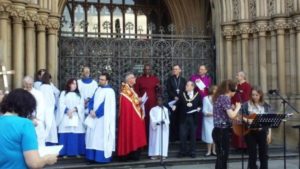 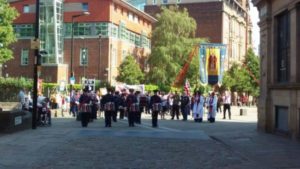