Statement from sr. Pat NDS from the Philippines concerning the Bureau of Immigration’s Deportation Order against her:

‘After attending a Fact-Finding Mission and telling some Coca Cola workers that the social teachings of the church support them in their formation of an association and demands for regularization and a just wage, I somehow got the ire of the President. Since then, it has been a series of allegations and answers. Church people have been supportive in that the claim of the government is that “missionaries” should only teach doctrine and convert. The ecumenical community has moved beyond this years ago and all have social teachings which they believe need to be lived out in faithfulness to Jesus. The international community, particularly those in solidarity movements, see the charges that I should not take part in fora, rallies, fact finding missions, as against both the constitution here and also international law which ensures freedom of speech, association, movement and religion to all. It has been amazing the support I have had from people across the social spectrum. But it is also stressful knowing it is the president who is wanting me deported and the power he has here. It is difficult to plan and to live day to day. But it has forced me to verbalize why I have done what I have and strengthened my belief that Jesus is in those who are poor and oppressed and they help me define my baptismal commitment and vocation as a religious of Notre Dame de Sion which is sensitive to the outcast and called to work for the promises first given to the church for all.’

We present the list of Sisters who celebrate jubilees of religious life during the year 2017: 70, 60, 50 and 25 years of religious profession.

After celebrating Mass on New Year’s Day, on the feast of Mary, Most Holy Mother of God in St. Peter’s Basilica, Pope Francis stopped to pray in front of the painting of Our Lady taken from the Church of Sant’ Andrea delle Fratte. The picture was painted to represent Our Lady as she had appeared to Alphonse Ratisbonne in Sant’ Andrea on 20th January 175 years ago.

General House – Rome: The Congregation has been awarded the Cardinal Bea Interfaith Award

This morning, February 7th,  the Congregational Leadership Team, Adriana (Costa Rica), Marie Lise (France and other European Countries), Clare (UK) and Mary (Canada-US)  met delegates from the Anti-Defamation League (United States) to speak about the work of the Congregation in the parts of the world they come from.   At the end of the meeting they received from the ADL the Cardinal Bea Interfaith Award on behalf of the whole Congregation, including those who have gone before us. 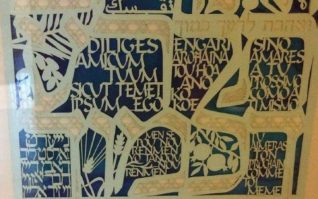 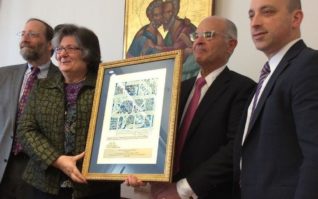 Scholars have recently examined the work of several groups engaged in the intellectual projects that provided the foundation of Nostra Aetate and, in some cases participated in the writing process. The Sisters of Our Lady of Sion are one of these groups.

They are an international women’s religious congregation, originally founded with a perspective of conversion that, over the course of a century, developed a commitment to encounter, dialogue and friendship. This article looks at their work in the years preceding the Second Vatican Council, as well as the period of the Council. It then looks at four critical elements that, over the course of several decades allowed the Sisters to make the journey from conversion to dialogue: philosemitism, ressourcement, the Shoah, and the Affaire Finaly. Using administrative documents, it then traces the actual development of thinking from 1946 to 1964.

This exploration shows the Sisters’ work as being part of a larger context in which women and men, lay people and clergy, scholars and pastoral workers underwent a transformation in the ways in which they understood the relationship of Jews and Christians and made possible a similar transformation in the Church’s self-understanding.